I’ve been living life on auto-pilot the past several weeks. I tried to pass the lack of ambition off as a vacation, but let’s just get real… I’m at a complete standstill.

I know how I got here. In November, right after I signed the contracts for Awenasa Island, I somehow pulled all three hamstrings in the back of my left leg. Because I’m a huge procrastinator I didn’t see a doctor and thought the problem would just dissipate into thin air and life would go on at its usual break-neck speed. WRONG! Listen up people, if you hurt your body, seek out a professional’s help!

Now, two months later, I’m stuck in a lackluster rut of despair. No, I’m not clinically depressed, just a little blue around the edges. I’m going to PT and the leg is slowly beginning to work again. Walking is hard, and I still can’t sit for long periods of time or stand for very long. Nerve damage is a Bitch, but I did ask for it by not seeking help, so who’s really to blame? No, I’m not asking, I know I did it to myself.

What do you do when you’re down in the dumps and no one’s around to understand you and pull you out? Grab your own damn boot straps and pull!!! Easier said than done, but hey, I’m not the kind to sit in a pile of my own poo for too long.

Here’s to those of us who can tell when they need to just get over it, and to those not afraid to tell us we need a shower and a bullshit check. Yea, it takes me twice as long to move through life right now (literally, twice as long to get my body to move), but who’s to say making it through this rough patch won’t make me twice as fast in the long run.

Cheers to the strong bitches among us!
Posted by Ann Stewart at 4:45 PM 2 comments:

I started writing on a regular basis about two years ago after joining a fabulous group of woman. Three months later I had the first chapter of my first romance novel complete, a task I had wanted to do for many years. As the months rolled on I continued to write. With the tutelage of my writing group and a desire to finally reach the dream of being published I kept on through family dysfunctions, broken computers and, illness. Six months after finishing that first polished chapter, I finished Awenasa Island, packed it in an oversize envelope and sent it away to a friend in the publishing world to critique.

The result of my hard work wasn’t a publishable novel, but countless lessons in what to do better for the next one. My review came back marked in red ink and, all though encouraging, pretty much ended my dreams of publishing the story. I could have taken the critique as the last nail on my writing coffin, but instead I chose to see it as the first building block to achieving my dreams. I sat down that very day and wrote the first few sentences to my second romance.

Fast forward six more months down the road. While editing my second novel, a best seller I was sure, I received and email from an editor and partial owner of a new up and coming publishing company. I had published the first three chapters of my novel on line, and she had read them. Even more, she had given them to her partner to read and they both loved the story. I put my life on hold and edited till my fingers went numb for two solid months. I fell in love with the story all over again. I held my breath and sent my baby away to Bluewood Publishing.

I was so sure my story would be rejected I regretted telling anyone I sent it. After all, this was the same story I had hidden in the back of my desk. Ten days later I received a contract. Fairy tale ending―I should say so.

That was two months ago. The “oh-my-goodness” factor has worn away and the reality has set in. I gave myself a few weeks away from writing to bask in the glow of victory. A few weeks became a month. One month became two. Every time I sit down to edit my second book I freeze. In the back of my mind I keep thinking, what if the first time was a fluke. What if the second novel is crap? What if I can never write anything but partial rough drafts again? Every time I sit down to write the doubt stops me cold.

My wheels are spinning and I’m putting in the effort but I’m only getting stuck deeper in the doubt. Oh, writing fairies where are you?

Anyone got any advice for a girl stuck in the mud?
Posted by Ann Stewart at 10:20 AM No comments: 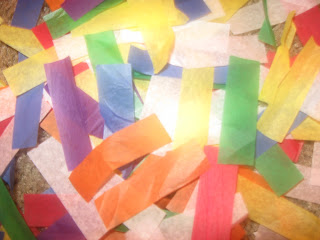 Yea, this is only a small pile of the confetti on my floor by the stoke of midnight.


My husband and son were asleep by ten so I retreated to the bedroom to play on facebook, update my website, send some emails, and watch a great movie. Sounds exciting right. Hey, I'm no spring chicken anymore and the chance to watch "Marnie" alone and uninteruppted was too good to pass up.

As for the resolutions, I only have one. I know I need to lose weight, my house needs a ton of work, and I could go on and on, but listing out all the faults I need to fix only depresses me. I want 1010 to be uplifting. Why start with the negative.

2009 was a good year for me. We replaced the camera my son threw in the trash ( life for me without a camera is no life at all), Scott bought me a laptop (better than winning the lottery), I signed my first novel contract, we had NO emergency trips to the hospital or otherwise, and we are a healthy and happy family. What could be better?

So, for 1010 I have no great expectations. I'll be happy if I can repeat the above again on New Years Eve. The one thing I will strive for is more publications. I'm in the process of entering several contests. Check out WOW, Woman on Writing, and Glimmer Train. Both pay well. And another book wouldn't hurt. Two might even be better.

Whatever your Resolutions are, I wish you luck, sucesses, and many happy returns in 1010!
Posted by Ann Stewart at 1:13 PM No comments: